IT’s hard to believe its a month since my last post and since then we’ve been snowed in thanks to the Beast from the East, which brought bitter winds and at least 10cms of snow. Snow returned again on the weekend but it was the Siberian winds which caused me the most discomfort as the snow fell in a sprinkle but soon melted.

I like my weather to be seasonal but by March I must admit I’m ready to say goodbye to the cold and hello to sunshine. I want to get on with my garden jobs! Spring is always a juggle between working in the studio and working outdoors but if the weather is good its quite nice to mix up the day with some desk work and some gardening. Sadly we haven’t seen much of that which means I’m still walking the dog in my padded coat and all the usual planting I’d normally be doing in my greenhouse this month has been forced indoors. My windowsills are currently bursting with pots and trays of tiny seedlings for the cutting garden. The cats are totally unimpressed. 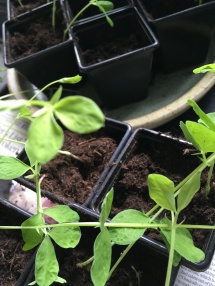 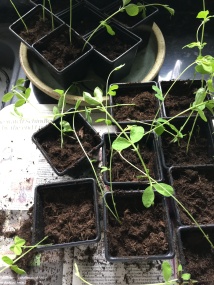 I’ve really got into cutting gardens in the past two years and last year I had more than enough flowers to fill the house from April to October. So this year I’m planning to make another cutting bed once the soil warms up and if all goes to plan hope to sell my spare bunches to a local shop. So more than ever I need the weather to work in my favour this year and be kind to me. Three or four weeks extra cold can make a huge difference to when the garden starts producing flowers.

I’ll be plotting my progress here over the next few months and as I go I’ll list the plants I use in case I inspire anyone to have a go themselves. In the meantime I’ve been planning ahead a bit and trying to focus on the jobs that usually get pushed to the sidelines in the rush to get planting – like splitting my snowdrop clumps, something I’ve meant to do for years and always leave too late. Last week I split eight large clumps into 40 more and planted them in the back garden where we have the odd one or two as opposed to the hundreds in the front lawn. Its easy to do as long as you lift and re-plant the snowdrops right after flowering. Just dig up your clump, separate the bulbs a bit, put half the clump back and use the other to plant as one or more clumps elsewhere. My varieties do well in sun or shade.

I also went up to the woods and cut more hazel rods to make into obelisks and climbing frames for the sweet peas currently sheltering in the kitchen. Cutting the young rods doesn’t harm the trees as long as you leave enough for a steady supply year after year and its very satisfying to see your plants growing up something you’ve made yourself (I’ll post some easy instructions here when I start making mine in a week or two). Last year my sweet peas were one of the best performers in the garden and their amazing scent plus their beautiful colours make them perfect in summer arrangements. And the more you cut, the more you get. So I’ve got at least six varieties coming up this year which will all need a nice framework to grow up. 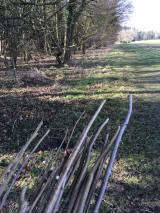 Other indoor jobs for this month include taking geranium cuttings, ordering summer bulbs and once the weather improves I’ll plant out my peonies and dahlias. I’ll also pot on the tomatoes which are now about six inches high on the windowsill and will need a bit of extra love before I move them out to the greenhouse in April. This weekend the clocks go forward and then it should really start to feel like Spring is properly on its way. And while I wait there’s plenty of work to be getting on with. I’m hoping to do more handcuts this year after two years of focusing on stockists. As ever I’ll be using the garden as inspiration for my designs.

I’d forgotten I’d left this here, a rather nifty reversible Rob Ryan papercut with a message that’s so true. I probably planned to frame it and couldn’t decide which side..😂 #wisewords #wisewordsoftheday #papercutart #papercutting #papercutout #robryan #treasured #lovelythings #motivationalquotes
Back in my other home. Its been over a year for me. Arrived to a house you could see your breath in. Much better this morning now the heating and the stoves are on. ❄️🍂🍁❤️ #sommarhus #gamlahus #homelove #periodhomes #periodhouse #mysweden #småland #autumnvibes🍁🍂🍃 #autumnview #kitchenlove
The plums are ripe, the leaves are turning and it was chilly today even in the sun. Love October. #autumnvibes #autumnleaves #autumnlove #autumn🍁🍂 #turningleaves #octoberlove #seasonalliving
I like to re-use and re-purpose things because I’m conscious my business involves making and selling stuff, albeit on a small scale. These old glass bottles were all dug up locally, no chips but some scrapes and patinas that remind me of rock crystal when I’ve added some tiny shiny flourishes. I think they make pretty bud vases; some hold paintbrushes or perfume. Not sure I want to part with them.. 😂 #oldbottles #oldbottle #oldglass #tinytreasures #tinytrinkets #oldstuff #vintageglass #shinythings #treasurehunting #vintagestyles #handcutting
Xmas decorations part 2, so these are my last foil animals, stars and hearts for this year thanks to the supply chain crisis causing me problems. I also have some of my pretty crystal drop decorations (made from Swarowski and repurposed vintage chandelier crystals). Stars and hearts £5.50, animals £6.50, large crystals £8.50, small £6.50. I have lots of colours so message if interested and I can send a pic so you can choose!
Ok insta/FB friends, I promised you first call on my limited number of xmas decorations before I put them into shops.. so here’s part one.

I sell my art online: https://www.etsy.com/uk/shop/SerenPapercuts