Lantern workshops are a new thing for me this year and last week I hosted my first one. It was held in my little studio hut and was a great success, partly I think because we did it one-to-one which gave me and my student Heather plenty of time to work out ideas and put them into action.

Heather probably wouldn’t mind me saying that she doesn’t think of herself as especially creative, so it was a surprise to her that what she designed and made turned out so well. I had planned to design and cut the lantern using my computer as that’s the way I make the ones I sell in my shop but in the end we opted to draw and cut by hand. Doing it this way gives you a lot more freedom and is also the traditional way to work. I prefer it. 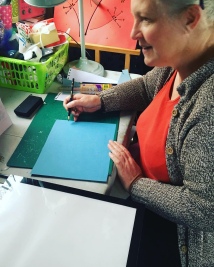 It probably helped that before she arrived I’d told her to have a think about what sort of designs she liked. She’s also someone who is quite particular about what she likes and dislikes and has an attention to detail that meant she took a lot of care with her work. But being good at art really isn’t what you need to come and make something with me. If you’re willing to get stuck in and have a go at a workshop I guarantee you will make something beautiful by the end of it. Making things and being creative is good for you, whatever the result. I’m a passionate believer that we should all try new things when we can, without worrying too much about whether we’re good enough to be experts.

This month is a strange one for me as it is interrupted by half-term and I’ll be back in Sweden for a few days. It means I’ve been kept busy, which I like, and thanks again to everyone who has ordered from my etsy shop, it makes such a difference! I’ve now put in place a voucher system that gives you 10% off your next order and this should be e-mailed out automatically but if you’re thinking of shopping and you don’t have this in your inbox then enter THANKYOU in the offer code box and the same discount will apply to you. I’ve spent the run up to this week ordering in new stock and trying out some new things for the year, like my printed blank cards based on the paintings I did last year, which are already selling well on the etsy shop 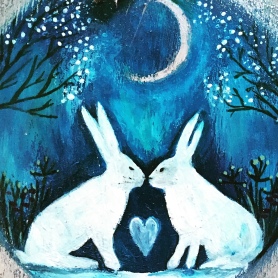 I’ve made some great new papercut cards for special birthdays too which is something customers have been asking me for, for ages. I’m sorry it’s taken so long! These aren’t available online yet, but if you would like on e then you can always message me or email serenpapercuts@gmail.com 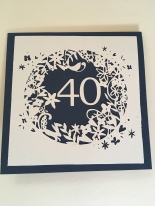 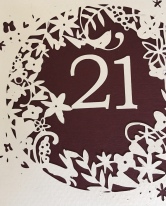 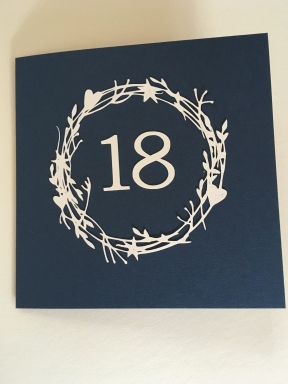 I’ve also made some more modern, wordy designs, which I’m hoping customers might like. Intricate designs tend to be my speciality but I also like the simpler papercuts that make a nod to paper dolls and folded cut outs. So I have these available as cards too, although they’re also look great framed.

In other news I’m currently planning new workshops for the spring and summer, As well as basic papercutting and lantern making I’d like to also offer silver clay jewellery introductions, basic lino printing, textile printing and lampshade design. I’ve returned to Designer Makers in Diss too for a three-month showcase, where I’ll be selling a mixture of old and new work and I have also been looking again at my wedding work.

When I first started in 2014 I did a lot of wedding work, making bespoke papercuts and also creating some pretty intricate personalised wedding cake wraps and toppers. I like these a lot, partly because once you’ve used them on your cake you can frame them into something really special or keep them and re-use them for a christening….

Partly with that in mind, last week I made some sweet little bell jars, which use the same mix of wire and paper cut outs that I use in my cake scenes. Bell jars have become much more popular recently which means they’re a lot cheaper than they used to be and you can find them in lots more sizes. The ones below, which are currently in the Giggly Goat, Norwich, are all handmade and just £25. They’re a great way of displaying delicate work and they also protect what’s inside from dust, which as a fairly fussy maker is a definite plus. 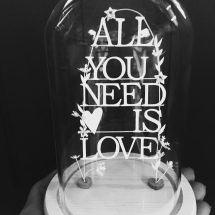 I hope you all enjoy your February!

Rain, sun, hail. At one point this afternoon it was 3 degrees. May is my favourite month but all the greenery can’t make up for the weather and my windowsills are jostling with all the veg plants I can’t pot out yet. Come back Springtime, we need you!😂❄️🌸🌿 #maytime #mayweather #sunshineandblueskies #sunshineandshowers #coldspring #springtimevibes #springwalks #sunsetgram
Order. Chaos. Everything has to fit and flow when I’m foil making. Which means stuff lands on the desk, gets moved, discarded, cut and somehow lovely things emerge..☺️ #cuttingshapes #cutting #creativeme #brainstorming #countrystyleloves #handcut #foilwork
Its blowing a gale out there tonight. Cold and wet. I’ve filled the house with flowers from the garden - it might not feel like May outside but indoors we’re blooming! #wetweather #stayingin #keepingcosy #flowerful #flowertherapy #tinyflowers #smallscale #kitchenvibes #kitchenview #candletime #candlelovers #medievalhouse #timberframe #oldbeams
These hand embroidered linen table mats were a fiver well spent today, I think. I’m not really a table mat person but the stitching is very good, plus the seller described them as ‘pretty pointless but utterly charming’. Sold!😂 #handstitching #embroidery #vintagefinds #vintagelinens #vintagestyling #vintagehomedecor #rummage #rummagesale #bargains
This little bumble was curled up and enjoying the sun today. Paid a visit to the lovely @gabriels.garden, and the tulips and bouquets were looking wonderful, always time well spent. #tulipseason #tulipsofinstagram #tulips🌷 #beesofinstagram #beelover #beelive #cuttinggarden #workinggarden #cuttingflowers #homegrownflowers #flowerfriday
When your mug matches your shoes..😂🌸 #coffeebreak #quickcuppa #teabreak #fikatime #feetup #anicesitdownandagoodbook

I sell my art online: https://www.etsy.com/uk/shop/SerenPapercuts